You can now save a search as a saved search feed. This works for individual sites, folders, All Site Stories, saved stories, and blurblogs. 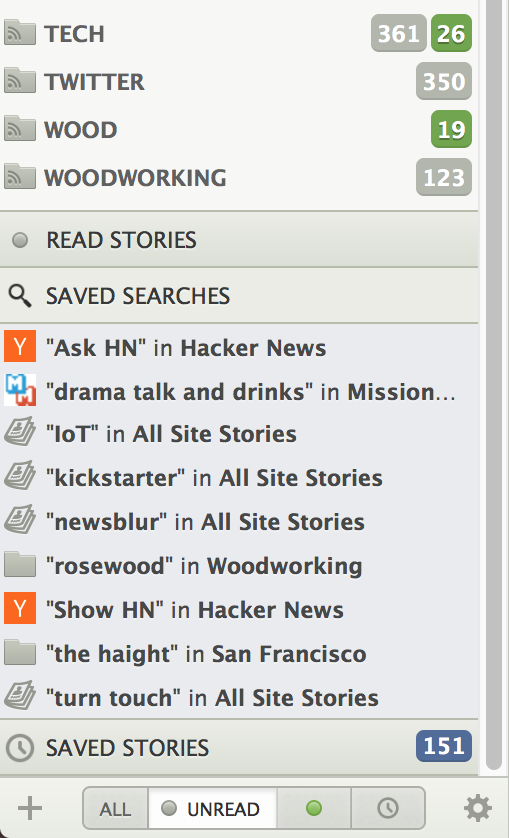 Saved searches are great for creating custom feeds with just the stories you want. Think of these new feeds as spotlights on parts of a folder or feed, ways to keep track of stories that share a theme across different sites. 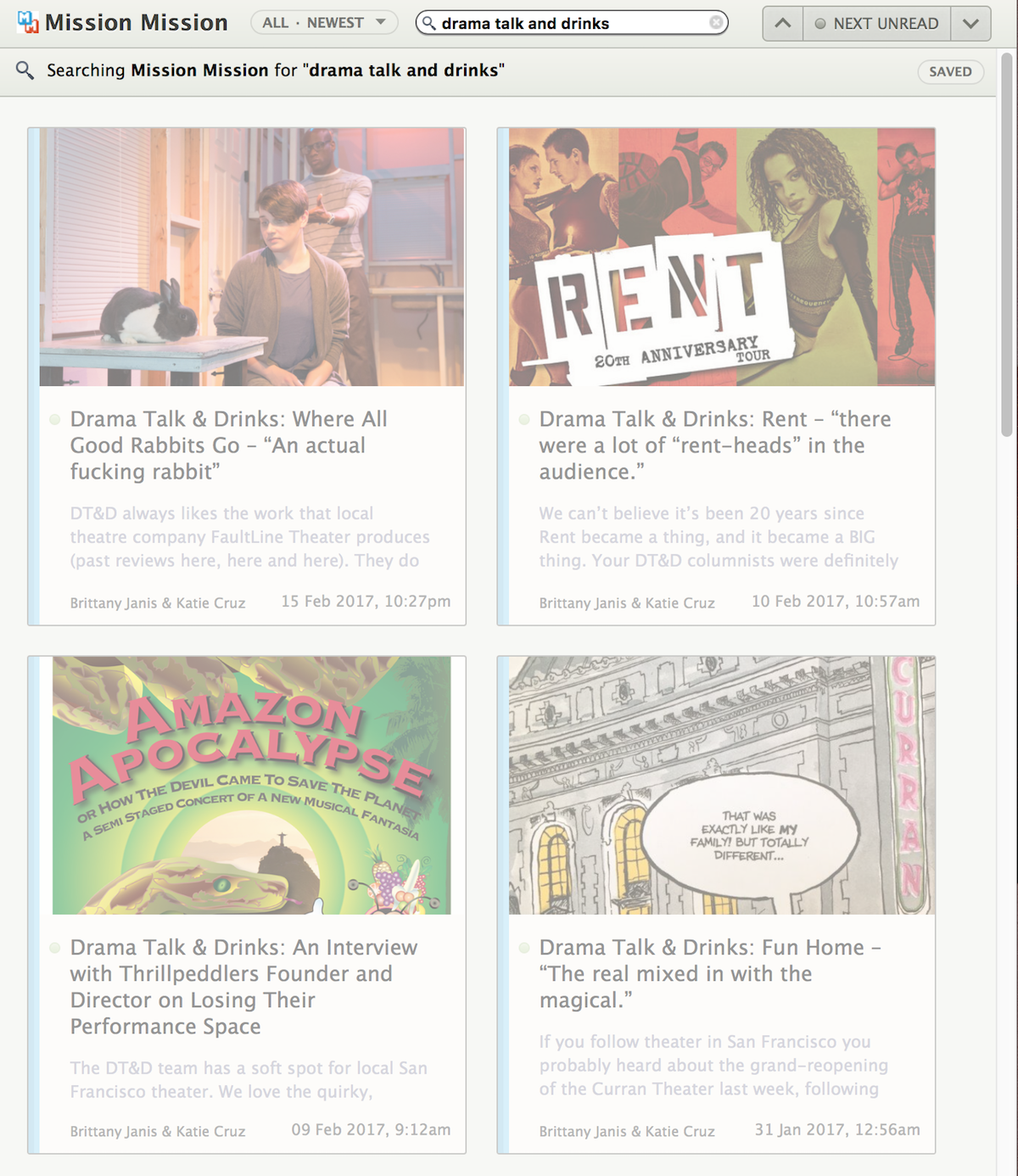 Or use saved searches to keep a single tag together for handy reference.

Another "you didn't you needed this feature but now you can't possibly live without it" from Samuel Clay... bravo!
Philadelphia, PA

This is super nice. But what would be *really* awesome is if I could filter saved searches to only display unread items and maybe get a count of them, so that they behave more like real feeds. Any chance of that happening?
New Jersey

samuel
That's a hard one. Of course it's possible, but that would take time to build. So people need to vote it up on the feedback forum.

What would be really cool as well would be to be able to create searches that /remove/ items, similar to a Google search using the -term. So, for instance, if I follow the "Strong Towns" blog but I am not interested in the #strongesttowns series, I could save a "-#strongesttowns" search.
Fort Washington, MD

gazuga
Seconded! I currently use Training on main feeds to filter out tags or individual words within post titles that won't interest me, but that's not as powerful as what you're suggesting.

This is actually pretty genius. One of those features I never thought about, but see a million uses for it.
Topeka, KS

Add The Economist to the List of Apple Watch Doubters by John Gruber
Sunday March 15th, 2015 at 12:13 PM

Yet in spite of Mr Cook’s bouncing optimism, Apple seems unlikely to turn its watch into the next big must-have gadget. Certainly, the watch will not match the success of previous products, such as the iPod or iPhone.

It’s ignorant to lump the successes of iPod and iPhone together. iPod was indeed successful — for its time. But iPhone’s success is at least an order of magnitude — maybe several — greater. And oddly enough the “Revenues by Product” chart that The Economist uses to illustrate this very article shows just that. Compared to iPhone, iPod’s peak revenue just wasn’t that great.

If you don’t think Apple Watch can at least match the iPod’s success, I think you’re nuts. I’m going to run out of claim chowder pantry space.

Here’s their explanation for this pessimism:

This is true for two main reasons. First, Apple’s newest creation replicates many of the functions that the smartphone already makes so seamless, such as checking e-mail, receiving calendar alerts and communicating with friends. People are unlikely to want to shell out a sum between $350 (for the most basic model) and $17,000 (for the fanciest version) for something with so few extra functions. Second, the Apple Watch is dependent on a nearby smartphone, which means that users will just be adding another device to their growing menageries instead of replacing one. This is not unlike selling someone a wristwatch that requires a pocket watch to work.

The Apple Watch’s current reliance upon a tethered iPhone is much like the way early iPhones required wired syncing to a Mac or PC for everything from music to contacts to calendars. Apple Watch will be an independent cloud client device eventually.

Apple Watch may or may not be a compelling device. The fact that it requires an iPhone companion will not determine that.

It's not wrong to observe that the device that Apple will sell in April probably isn't going to break sales records. Whether future versions do will depend on what those future versions have or don't.

Gruber is being disingenuous (but that's what Gruber does) to call it claim chowder when someone looks at what exists today rather than an imagined future version with the full wish list of features that he keeps talking about. It's fair to be skeptical of whether or not Apple (or anyone else) can overcome the battery life limitations to get those features in there.

I think almost everyone agrees that for this to be a big success, it needs to be able to replace a phone at least some of the time, which no current smartwatch can do. Maybe version 5 or 10 will do that, but even if it does, it won't make the doubters of version 1 wrong.
New Jersey

Apple Watch unlikely to be as successful as one of the most successful products in history.

Fascinating analysis from Horace Dediu. The number of Windows PCs vs. Macs sold changed dramatically starting in 2004, three years before the iPhone, and a year before they announced the switch from PowerPC to Intel processors. I think the core factors behind this pivot point were:

Even without iOS, the Mac’s fortunes changed dramatically starting in 2004. But when you do factor in iOS, that’s when things really changed.

ejp1082
reply
I think the so-called iPod Halo effect is overstated; it doesn't make a lot of sense that someone with an iPod (that works with Windows) would then want a mac because of the iPod. I think a clearer reason is that 2004 was the height of the Windows XP spyware plague, and it caused a lot of us to look longingly at the seemingly malware-free Mac.
New Jersey

mcormier
The halo effect is important. Prior to the iPod, Apple computers had a reputation of being expensive and for elitists or eccentrics. The iPod and later the iPhone helped Apple change their brand perception to an appliance company instead of computer company for weirdos.